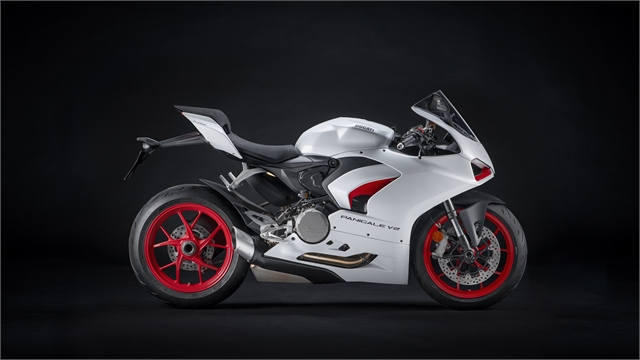 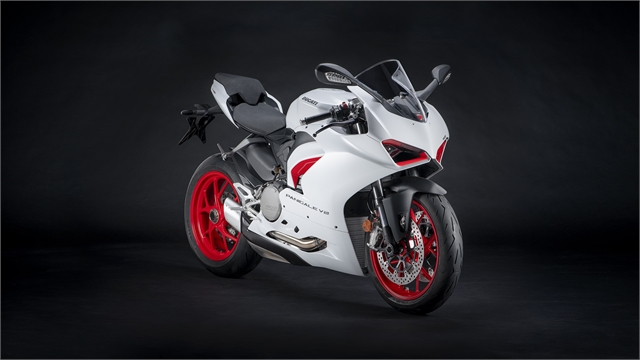 94 people have recently viewed it.
Details

The perfect fusion of power and elegance

The new Panigale V2 Is a beefy yet compact bike of essential design with clear-cut lines that convey power without compromising classic Ducati superbike flair.

The Panigale V2 features the single-sided aluminum swingarm, the hallmark of every high-end sports Ducati. The extensive fairing highlights the more compact twin-cylinder Superquadro engine (smaller in comparison to the Desmosedici Stradale), creating a bike that is visibly leaner and less intimidating than the Panigale V4.

The Panigale V2 is now available both in the traditional Ducati Red with black 5 Y-spoke rims and in the new, vibrant White Rosso livery that mixes details in intense Ducati Red with Star White Silk.

The predominance of the white highlights the bike's shapes and strips it down to its purest, perfect self. The more aggressive side of the Panigale V2 becomes even more energetic, boosted by the red on the rims, the front air inlets and the air deflector of the upper half fairing.

These latter two red accents accompany the air inside the motorcycle, air flows that power the engine and cool the radiator.

Dominating the front end are the two large air intakes, the upper parts of which incorporate the full-LED headlight. The new intakes merge with the existing air feed layout via newly designed ducts that, delivery rates remaining equal, lose less pressure than the previous ones, thus boosting intake efficiency.

The headlight has been compacted with the express intent of giving the intakes themselves - especially with the bike at standstill - a more menacing air. Two specially shaped rims on the undersides of the air intakes speed up air inflow. The full-LED headlight consists of a Daytime Running Light (which creates a dual 'eyebrow' effect, highlighting the upper rim of the air intake) and two compact dipped beam / high beam LED modules.

The tail is built on a steel Trellis subframe lined with plastic covers that runs from the vertical cylinder to the tailpiece, of winged, spoiler-like design.

The tailpiece incorporates the full-LED tail light, also wing-shaped: while a one-piece assembly, the light has two distinct parts as per Ducati sports bike tradition. The Panigale V2 combines a traditional Ducati Red livery with black 5-spoke wheels of a Panigale V4-inspired design.

The 955 cc twin cylinder Superquadro engine complies with Euro 5 standards. Compared to the engine on the 959 Panigale it delivers an additional 5 hp and 2 Nm more of torque. it also features a new compact exhaust silencer, routed entirely underneath the engine.

With a maximum power of 155 hp at 10,750 rpm and a torque of 104 Nm at 9,000 rpm, this twin cylinder engine delivers power smoothly and enjoyably on the road while remaining forceful - yet always under control - on the track.

Performance enhancement largely stems from the new injectors (two per cylinder, one above and one below the butterfly, larger, and re-angled) and the new inlet ducts which, delivery rates remaining equal, lose less pressure than their predecessors, thus boosting intake efficiency. Oval throttle body dimensions remain unchanged with an equivalent diameter of 62 mm. Throttle bodies are controlled independently of each other via a full Ride by Wire system.

On the Panigale V2 the engine acts as a stressed member of the frame. Set 90° apart, the cylinders are banked rearwards around the crankshaft axis, resulting in a 21° angle between front cylinder and horizontal plane. The two cylinder heads and aluminum top covers feature a ribbed design to reduce mechanical noise. The crankcases are vacuum die-cast using Vacural® technology to optimize weight saving and ensure consistent wall thickness and increased strength. Crankcase cover, clutch cover and sump are all made of die-cast aluminum.

The Superquadro engine uses brass bushings for the crankshaft, lubricated with pressurized oil via ducting inside the crankcase. This ensures efficient lubrication of the crankshaft and rapid oil recovery thanks to a lobe pump that - as on MotoGP racing engines - lowers the pressure in the connecting rod casing. Operated by a shaft, in turn driven by a gear train, the pump keeps the casing zone underneath the pistons in a controlled, constant low pressure state, thus reducing the resistance encountered by connecting rod rotation at high engine speeds and ensuring efficient oil recovery at all engine speeds.

The compression ratio is 12.5:1. The 955 cc displacement is obtained with a 60.8 mm stroke and 100 mm bore, measurements that flawlessly combine good handling and fluid power delivery. A 100 mm bore allows for large valve diameters: 41.8 mm for the intake and 34 mm for the exhaust. The valves are controlled by a Desmodromic system with racing-derived rocker arms, 'super-finished' and with a special DLC (Diamond-Like Carbon) facing for reduced friction and increased fatigue strength.

Transmission features a six-speed gearbox with the Ducati Quick Shift up/down EVO 2 system and an oil bathed clutch. The latter has an anti-patter and progressive self-servo mechanism that compresses the friction plates when under drive from the engine without any extra effort required from the rider to release the clutch.

The Panigale V2 has revised ergonomics aimed at improving comfort. The new seat allows for greater longitudinal movement of the rider and greater comfort thanks to the new foam that raises it by 5 mm. The position of the footpegs remains the same.

The Panigale V2 frame consists of a compact, enhanced-strength die-cast aluminum monocoque structure that uses the Superquadro engine as a stressed member.

Attached directly to the cylinder heads, the monocoque frame protrudes forward to house the steering head bearings, contained in two aluminum bushes. In addition to working as a frame, the monocoque also acts as an air-box; it contains not just the air filter but also the throttle bodies and the fuel circuit, complete with injectors, and is sealed off by the steel fuel tank bottom.

The front-end geometry has 24° of rake and 95 mm of trail. At the rear, instead, the double-sided swingarm has been replaced with a sophisticated, fully die-cast aluminum single-sided swingarm. The bike has a 1,436 mm wheelbase and weight distribution is 52% at the front and 48% at the rear.

A Sachs steering damper completes the front-end package.The rear suspension features a fully adjustable, Sachs monoshock, which reacts to the motion imparted by the die-cast single-sided aluminum swingarm via progressive-rate linkage. The shock absorber is side mounted to make the unit fully accessible for rebound and compression damping and spring pre-load adjustments.

The Panigale V2 has fork slide out by 2 mm and a new shock absorber 2 mm longer that together with the new Pirelli Diablo Rosso Corsa II tires make the bike more intuitive, agile and fun to ride, moreover a fine-tuning of the suspension hydraulic setting improve comfort in road use.

The Panigale V2 front brakes use twin M4.32 Brembo monobloc callipers actuated by master cylinders. The front calipers grip 320 mm discs, while a single 245 mm disc at the rear is gripped by a single Brembo calliper.

A new tread pattern with a slick shoulder zone optimizes the contact patch and ensures more even wear. Aspect ratio and structure are also racing-derived and designed to maximize cornering agility and 'feel'.